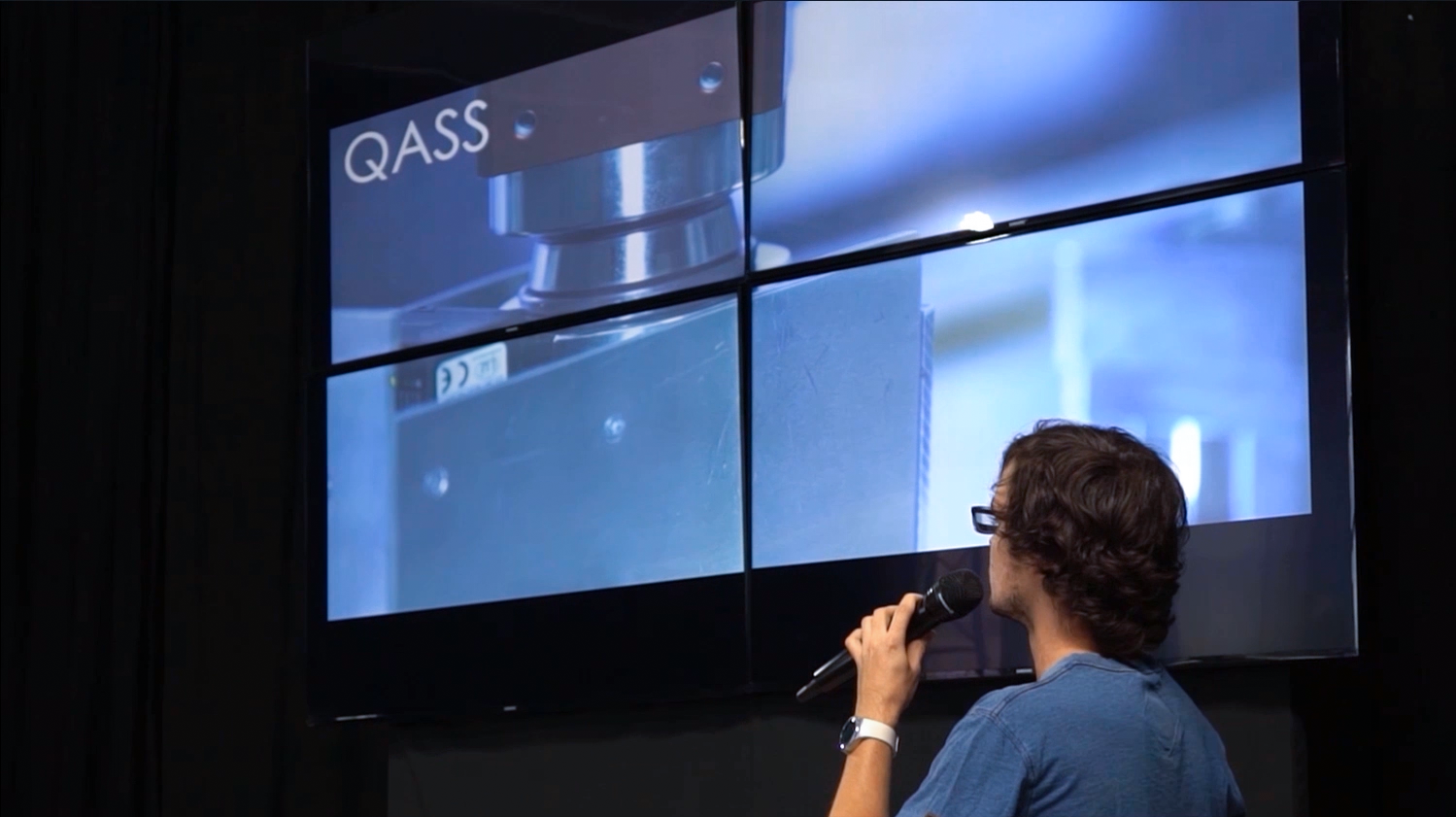 In times of Corona this is not an easy thing to do. Qass has taken advantage of the mandatory break in order to end the paths already taken and to introduce groundbreaking innovations in its data analysis. In doing so, the users and applicability through optimal adaptability are at the forefront of our development. The topic of hardness measurement with Qass micromagnetics was also part of this innovation offensive.

Hardness is used in industrial production to evaluate the quality of surfaces in order to determine the degree of resistance to penetration by other materials. Material properties such as strength and wear behavior can be derived from this. For the hardness measurement, components or ground sections are examined in batches in laboratories under hardness testers with the indication of a scale value. A test specimen penetrates the material and the geometrically dependent material reaction is evaluated, usually the depth/diameter of the hole produced or the material throw-up. Common hardness testing methods are Vickers, Brinell or Rockwell, each of which makes different demands on the shape and material of the test specimen. A 100% hardness test of each component fails due to the time required for the measurement. Further disadvantages are the insufficient statistics about the hardness degree with mostly only a maximum of five hardness indentations in close positioning to each other and the limitation to a small area, which does not allow the characterization of hardness curves on components.

The hardening of steel depends on the carbon content and the heat treatment achieved. A special hardening microstructure is produced and, if necessary due to the intended use, a tempering microstructure. Compared with the normal initial state, not only the hardness and other material properties change during hardening or tempering, but also the magnetic properties. One magnetic property directly related to hardness is the time-dependent magnetizability of a material. This is referred to as hard magnetic and soft magnetic materials -respective circles-. If an external alternating magnetic field is applied to a material and continuously increased, hard magnetic materials, in contrast to soft magnetic materials, require more time to reach saturation, a complete magnetization of the material. In the meantime, the magnetic structure in materials changes abruptly. These changes can be measured with coils and generate inductive currents. This effect is called Barkhausen noise.

Since 2001 Qass has been an expert in data analysis and our methods have been linked to Barkhausen noise (BHN). The combination of BHN detection and spectral analysis is unique. This results in a new, hitherto unexplored view of BHN signals and their applications in industrial environments. Through the application of adaptive electronic filters, we generate a process stability that has so far not been linked to the BHN, even under harsh environmental conditions. Interfering influences, which so far made the transfer from laboratory application to production difficult, are thus eliminated. This also reduces the Teaching effort. Through our own as well as external research results we can show that hard magnetic circuits also correlate with hard materials and soft magnetic circuits with soft materials. The decisive correlation is the proportion and position of carbon in the lattice of the material. The established hardening methods with their scale representation can be transferred to Qass micromagnetics. A linear relationship between the determined amplitude of the spectral data and the hardness can be determined by just two heat treatment states of the same material and can be linked to the equally linearly related hardness values of the respective hardening process. It should be noted that the method provides statistically significant and repeatable results, since the magnetization of the material usually takes place at frequencies greater than 100 Hz, and thus 50 remagnetizations per second take place. The volume that is considered is the volume that is located between the electromagnet used for external excitation and not just the singular point.

Improvement of applicability and adaptability

The measurement is contactless. It is important to have the same distance between two components to evaluate the hardness. Qass uses modern methods to automate measurements. We combine Qass micromagnetics with collaborating robots and linear axis drives, perform sensor fusion and facilitate access to the interpretation of measured values.

When determining hardness, the orientation of the magnetic field and distance to the material are decisive for the quality of the measurement. Therefore we have combined the sensors of Qass micromagnetics with laser point distance sensors and laser line scanners. In case of deviations from the workpiece, algorithms still calculate the correct hardness value. In order to accommodate the consistent industrial automation, the merged system is supplemented with collaborating robots or linear axis drives. This results in a completely new class of automated hardness testing with integration possibilities in production for 100% testing of components. A special project is the product Zelos, which allows reproducible magnetic determination of density differences in the component. Here, too, the advantages lie in the better statistics of the values.

We use two levels of data analysis. The first level consistently deals with the calculation of the data. The second level accesses the calculated data and visualizes the data in a comprehensible way and can also control the measurements.

The first level of data analysis is based on the Qass operator model. An operator is a logic device with a specific function in a data flow model. The first class of operators represent the access to the basic functions of the measurement system such as data stream or time signal. The second class perform the actual data analysis. The core element is the spectral pattern recognition with which referenceable objects can be searched for from the spectral data in new data streams. The third class is used for machine communication, data forwarding or display of data. At present, there is a large number of operators that are programmed in C++ and allow a quick adaptation to different measurement tasks. The script operators represent a new and separate class of operators. By using well-known script languages such as Java and Python, it is possible to implement your own programs in the data flow. The operators function like an own interface and let the capabilities of the measurement system grow dynamically for adaptive implementation for different requirements. Python is particularly interesting with libraries and program components of machine learning to be integrated.

The second level is called Qass PenGUI. With the help of the script language QML interfaces can be created especially for the own application purpose. The user simply puts together his own user interface and can even use his own corporate design. The measurement tasks and data analysis continue to run in the background anyway.

Of course, this also has an impact on our working method, which in future will be geared towards putting together project teams that implement user requirements in the best possible way. The speed with which Qass implements new developments will be reduced from months to days.