Over a century of Barkhausen noise

The early 20th century is known for its discoveries and developments which are presently still relevant to us. They contribute to and improve our understanding of the world we live in. For instance, the discovery of subatomic building blocks took place in this period. Subatomic building blocks are the particles that form our universe. As their behaviour could no longer be explained using Newtonian physics, the theory of quantum mechanics was developed. Quantum mechanics define our knowledge of nature to this day.

Another event in this era was the discovery of the Barkhausen effect by the German physicist Heinrich Georg Barkhausen. Barkhausen noise is an effect which can only be observed in ferromagnetic materials. Ferromagnetism is a well-known form of magnetism commonly found in fridge magnets. In addition, there are more than half a dozen other forms of magnetism whose explanations are beyond the scope of this article. Ferromagnetic materials distinguish themselves from other materials by showing a hysteresis upon magnetization or alteration of the magnetic orientation. Hence, a hysteresis is the phenomenon exhibited by a ferromagnetic material, in which the reaction of the system to changes is dependent upon its past reactions to change.

To understand what happens in a ferromagnetic material when it is magnetized or when its magnetic orientation is changed, the models developed about 100 years ago need to be used. The French physicist Pierre-Ernest Weiss postulated the existence of elementary magnets in a ferromagnetic solid body. These elementary magnets, referred to as Weiss domains, have a certain magnetic direction. You could say that they represent the smallest magnetic areas in a material. Even though these magnetic areas are very small, they consist of many atoms. For the formation of Weiss domains, the crystallization of these atoms in a cubic space-centered lattice is necessary. Since ferromagnetism is a cooperative effect, it cannot be explained on the basis of individual atoms.

The emergence of hysteresis is logical and clear. Yet the curve has no continuous shape. It rather consists of small discrete jumps. Heinrich Georg Barkhausen proved experimentally that the reorientation of the individual elementary magnets does not take place simultaneously but successively and at random. Thereby, he confirmed Pierre-Ernest Weiss‘ assumption of the existence of elementary magnets. In his experimental setup, each change in the magnetic orientation of an elementary magnet caused a small current flow in a coil. This current can be made audible through an amplifier and loudspeakers, and sounds like as a series of crackling noises. Consequently, the effect is called Barkhausen noise. 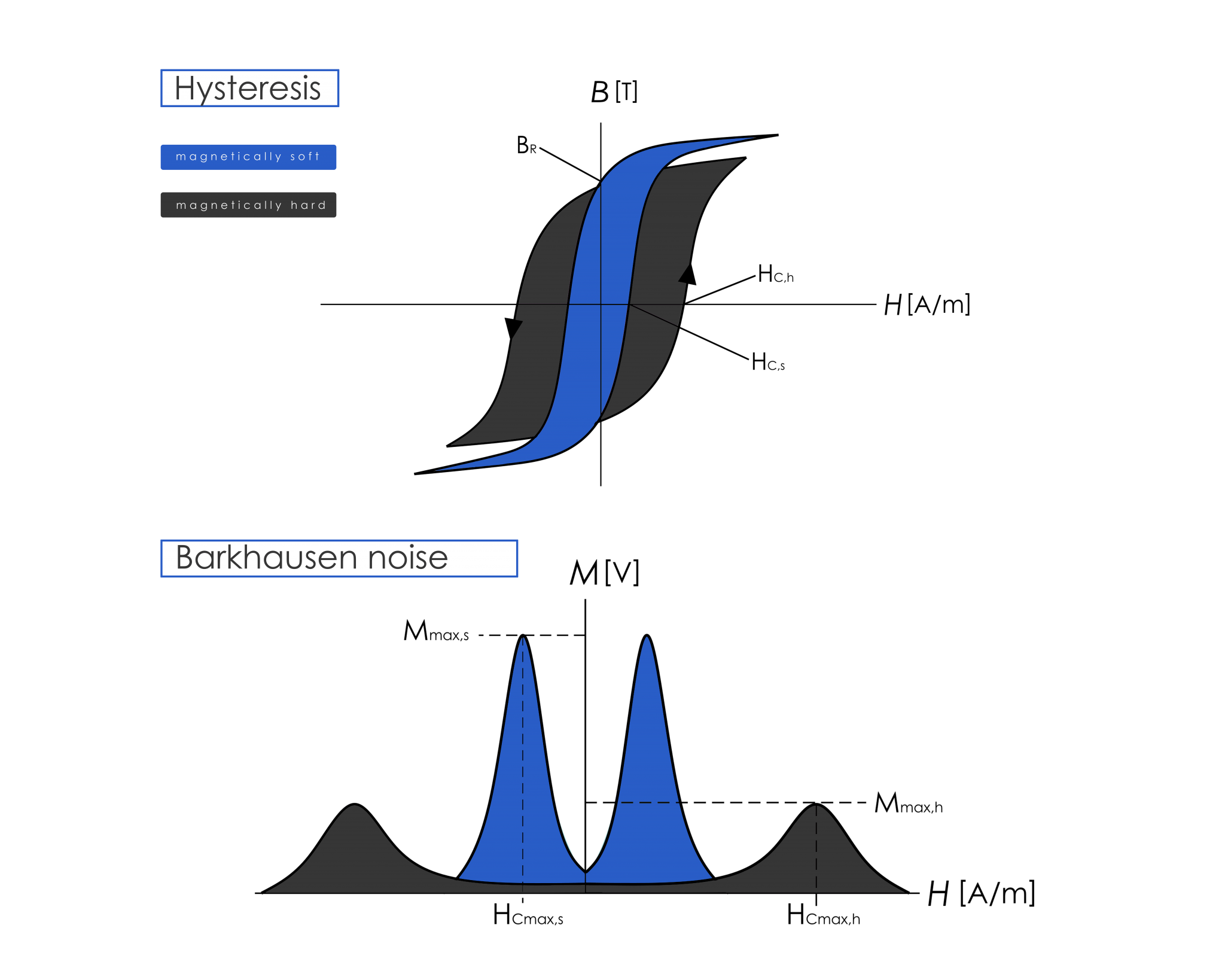 We are continuously refining our µmagnetic measuring system to make it even better. In addition to local hardness testing, our measuring system can also capture hardness curves. Hence, with QASS µmagnetic is also possible to detect lower hardness or re-hardening areas (e. g. due to grinding burn). Read more about this in the next blog post.