Optimizer4D is able to detect broken force fitted workpieces during the process automatically. Simultaneously, the measuring system recognizes if a unit was entirely and correctly joined.

The graphics show the difference between the acoustic emissions of two force fitting processes in which two round steel components are being joined in an elastic-plastic press fit.

Machine, component types and process parameters are identical. The only difference: One image shows the signal sequence of components that have been damaged during the force fitting process, the other shows a flawless process.

The signal display of the force fitting process clearly shows cracks occuring during the process. A torn component generates a different image than a flawless one. The same applies to workpieces that are being joined from several components. 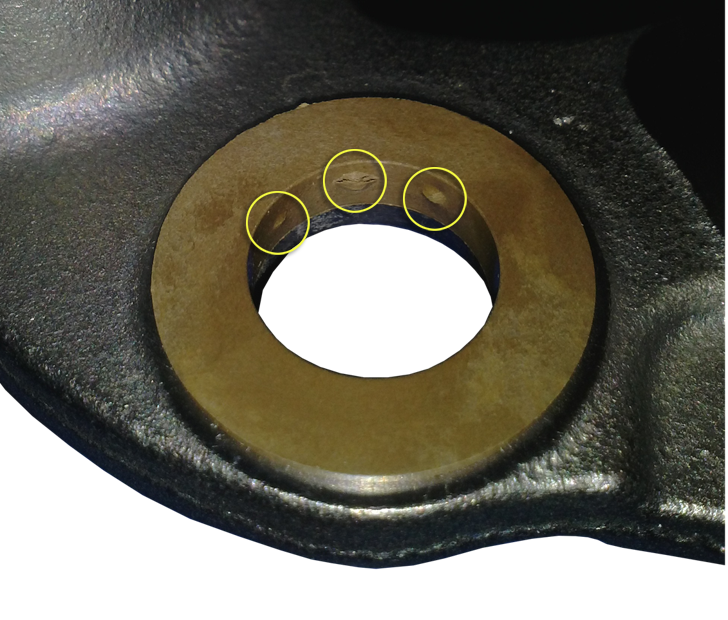 When pressing plastic parts into steel workpieces various defects can occur, as the image shows. Optimizer4D is able to identify the acoustic emissions of these defects.

Starting point for the study was the discard of an assembly process. The problems: small cracks near the joint. The same applies to components that are made up of various other parts. If, for example, a safety ring is missing, the corresponding signal in the HFIM-depiction is missing too and is thus detected by the system. Then, the faulty component could be selected out by the machine control.

Both depictions below show a force fitting process with crack formation. The image of the faulty process (left) shows nearly identical signals as the image of the flawless process (right). The difference: Additional strong single signals with high amplitudes and significant parts in the high frequency area can be seen – characteristic signals for cracking in metal; typical in faulty force fitting. The damage can be seen in the image (right) of the component.